How Can an Atheist Be A Christian? 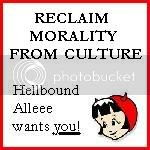 This entry is part of the War on Relativism.

Most Christians are atheists, and many atheists are christians!

I was listening to a very interesting episode of This American Life, called Allure of Crime. In one of the stories, a man told of his childhood with an abusive minister father. The young man related his final confrontation with his father, where the man threatened to beat him with free weights, and he defended himself by cutting his father's throat, sending his Dad to the hospital, and away from him for the rest of his youth.

After that incident, the man entered a life of crime. He said that he feared only two individuals in this world: his dad, and God. And since he couldn't see God, he decided to become his own god. That meant, in his addled fundamentalist christian mind, that he was free to harm others as payback for what his father did to him. He decided that since he had destroyed his source for morality, he had no morality to follow.

As you know, we've been doing a lot of writing about moral realism, and we've been getting a lot of objections to it, exclusively from atheists. It appears that the objections stems from their assertion that morality is only imaginary, and following standards is arbitrary and voluntary. The standard is only something agreed upon by groups of people, rather than something based on the laws of causality, as we assert.

Let me repeat for those who have just joined us:
Morality is the study of causality as it relates to human action.


In Christian Morality, Christians have a being who can change his mind, as is not subject to the laws he makes. Most relativists don't understand that means Christianity is relativistic. They tend to think it is "objective" which they confuse with "absolutist." In leaving a cult such as Christianity, the relativist sees that standard as oppressive. Some atheists replace the oppressive standard with another oppressive standard, Culture. You can still be counter-culture, they think, while retaining values they see as "belonging" to a culture, which in most cases is Christianity.

Remove God from Christianity, they think, and the moral standard becomes culture. They see themselves as following the moral rules of christianity without believing in God, which actually makes them more "functioning Christians."

Which is ironic, since neither group--functioning Christians, or the Christians--follow Christian morality. The Ten No-No's which are identified as morality, are in fact not moral at all. They're mostly not even legal in the US. The Christians who believe in God are "functioning atheists," because they live as if there were no god, and no absolute No-No's.The atheist who believes in a Christian Morality lives as if there were none. (The answer to both is, "there is none.")

Remove both irrational beliefs from the problem and what are you left with? What you had to begin with: you and the facts of nature. Now go take on the day.

Thanks for listening.
Posted by Hellbound Alleee at 8:57 AM

Morality is the study of causality as it relates to human action.